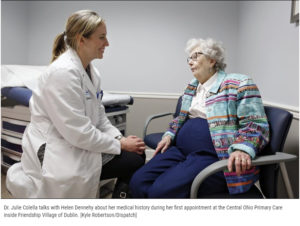 By Kevin Stankiewicz
The Columbus Dispatch
Link to article: https://www.dispatch.com/news/20190407/retirement-communities-adding-on-site-clinics-to-improve-seniors-health

Tom Elliott won’t need to drive to Gahanna to see his doctor anymore. Instead, he’ll walk about 220 yards from the main lobby at Friendship Village of Dublin.

The reason? Well, because now he can.

As of last week, the 90-year-old and all the other residents at the senior-living community have a full-fledged doctor’s office operating five days a week there.

“It’s a great improvement,” said 88-year-old Jack Pettit, who used to drive almost 20 minutes to see his physician in Dublin. “It’ll be just like going to the doctor, but just down the hall.”

Transportation barriers can keep seniors from getting the health care they need, and not being able to access primary care, in particular, can lead to increased reliance on high-cost hospital emergency departments.

More clinics are being opened in senior-living communities nationwide through partnerships like the one between Friendship Village and Central Ohio Primary Care (COPC), experts say.

“The idea of having primary care embedded where people live makes a whole lot of sense for older adults,” said Dr. Julie Bynum, a professor of internal medicine at the University of Michigan.

She said it can result in fewer hospitalizations as well as fewer emergency department and specialty physician visits. It also can lower the overall number of doctors that seniors see.

“If you think about the way we used to do medical care when we were in small towns, there used to be a community doctor who was pretty much embedded in the community,” Bynum said.

It also allows doctors to automatically understand where and how their patients live, she said.

For example, if a senior-living community resident gets sick in the evening and calls for an outside physician, that doctor might not know what kind of care is available at the residence, such as whether a nurse is onsite 24/7, Bynum said.

But if the doctor has an office at the facility and knows there’s a nurse available, “you don’t have to send them to the emergency room,” she said.

An enhanced patient-doctor relationship also can lead to better care around memory-loss issues, such as early signs of dementia, or possibly an underlying condition such as a urinary-tract infection, said Dr. Brent Forester, an associate professor of psychiatry at Harvard Medical School who sees patients at assisted-living communities.

COPC, a health-care provider with about 75 practices in central Ohio, will have four doctors who work out of the Friendship Village of Dublin office.

Residents don’t have to use COPC physicians as their primary-care doctor, but switching was a “no brainer” for Elliott.

Before the partnership with COPC, there was a physician at Friendship Village, but with less regularity because the doctor also provided care at other facilities.

The way primary care is delivered at senior-living communities varies greatly, but facilities are recognizing that closer relationships with doctors lead to better care, Forester said.

Doherty said it’s possible COPC’s primary-care practice at Friendship Village will be opened to community members down the road. But for now, the focus is on making sure residents’ needs are met first.

“I think it’s a game changer,” she said. “And I think we’re going to see this pop up all over the place.”